A Few Notes on the VIX 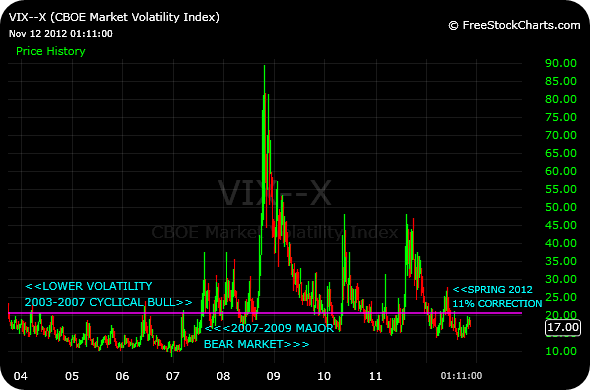 The CBOE Volatility Index (VIX) is known to measure the amount of fear, or lack thereof, in the options market. The higher the VIX during a sell-off, the closer the market tends to be to panic bottom. Of course, what constitutes “high” is a relative term. In the 2007-2009 major bear market, a high VIX meant a move up through 80. In the 2003-2007 cyclical bull, high was above 20 during corrections.

In the current 2009-present cyclical bull, the VIX has seen spikes up through 45 during the major corrections in the summers of 2010 and 2011.

Interestingly, the spring 2012 correction we saw, to the tune of 11%, only saw the VIX reach the high-twenties. In other words, the fear and panic was nowhere near what it was during the prior two summers.

Currently, the VIX has yet to pierce 20 in this correction since September. At first blush, the easy answer is that the VIX “needs” to see a super-spike up to 25-30, at least, in order for this correction to conclude in stocks. However, with the VIX relatively slumping during last spring’s correction, there is now a distinct possibility that the VIX is acting more typical of a cyclical bull, as it did in the 2003-2007 one, where 20 is the ceiling.

History dictates that the current bull needs far more complacency before it forms a major top. This time could always be different, but a VIX that remains under 20 in this correction and subsequently collapses would be the setup for a leg higher into the greed/euphoria phases that traditionally conclude the bull.