Still Contained, But a Pain 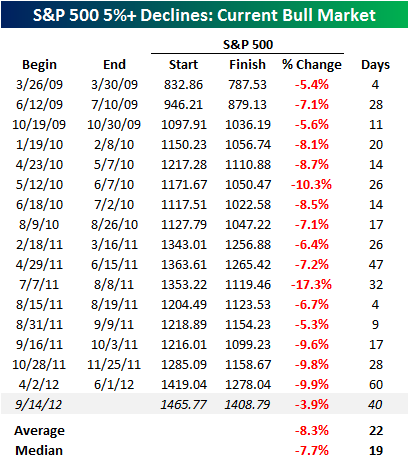 Courtesy of Bespoke Investment Group, you can see on the chart above that the current market correction has carried on for nearly twice the amount of time of the average correction since the cyclical bull began in March 2009. Despite the amount of grinding sessions we have seen, the S&P 500 is down only 4.5% from recent highs, after Wednesday’s session. True, the Nasdaq Composite is down 6.9% from the September highs, but even that downturn can be seen as being within the context of a moderate bull market correction.

Of course, the main issue with that analysis is whether the rubber band fails to snap, instead breaks, and we head much lower. Indeed, every bear market starts with a seemingly innocuous 4-6% correction, only to see things unravel in short order. With that in mind, it is important to have some price levels where you are willing to completely step aside and let the selling play out.

The fact of the matter is that no one knows exactly how deep a correction goes. I expected this correction to be a relatively contained one of 3-5% off the September highs. While the S&P is within that threshold, the Nasdaq and Russell went deeper. There have, indeed, been a string of distribution days in the Nasdaq. However, as we saw in the November 2010 correction, that can be a lagging indicator.

If you missed Woodshedder’s blog post the other night, I think he perfectly captures the essence of a tedious but contained bull market correction, thus far.

…I see nothing abnormal about the market. I’m expecting a minor correction of about 5% (from the highs). These are similar to getting colds: You get them a few times a year; they may last a couple of weeks and make you feel like crap, but they don’t kill you.