Markets in Everything: A Generational Top in Duke Basketball? 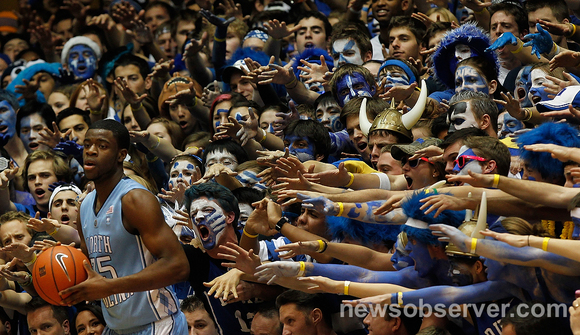 Duke University basketball has, and continues to be, an elite national program, consistently competing for national championships under Hall of Fame “Coach K” (Mike Krzyzkewsi). Duke has had an incredible home-court advantage, with a great record in its Cameron Indoor Stadium, winning roughly 90% of their past 300 home games. Part of the mystique, in addition to great players and Coach K’s astute leadership, can be attributed to their rapid “Cameron Crazies,” or students who are loud, and highly supportive for the Blue Devils’ players, while intimidating opponents.

Recently, though, attendance has been dropping. Duke won the National Championship in 2010, so it is not like the program is falling off a cliff. However, perhaps the market of students is out in front of the inevitable pullback from greatness.

According to Mike Rutherford at sbnation.com,

Due to dropping student attendance that has fallen consistently in recent years, Duke Athletics has been forced to sell a healthy amount of its student tickets for home basketball games to the general public.

The days of 1,200 “Cameron Crazies” filling up section 17 certainly appear to be long gone, as Duke now reports that only “approximately 650” undergraduates have attended each game this season. That’s about 150 fewer than the average during the 2008-09 season.

When Duke played Wake Forest last week, 400 tickets were made available to the general public, and section 17 was still well under capacity for the game. At multiple points during the game, a perturbed Mike Krzyzewski gestured for the students to make some noise.

“It has nothing to do with the revenue. We just want it to be full,” Director of Marketing and Relations Mike Forman said. “If there were 1,200 students every game we would love it.”

This is not the first season in which students have been accompanied by paying customers in Section 17, the 1,200-seat stretch of bleachers that run parallel to the court across from the team benches. Last season, Section 17 tickets were sold for every regular season home game except for Michigan State and North Carolina. Approximately 850 tickets are sold to home games during winter break, reserving 100 spots for local students to attend.

“It does take a lot to go to K-Ville and wait outside, sometimes in the cold and in the rain, and then go into Cameron where you have to stand and jump up and down,” co-head line monitor Ellie Garrett said. “Students need to realize that going to Cameron is… an awesome experience.”

Coach K…eep It down in there, kids are trying to study Court?

I’m just getting you started here.