Stocks That Put You to the Test

Winning stocks in their prime, such as Microsoft in the 1990’s, are very forgiving to just about everyone except shorts. If you are not sure whether you are trading it or long-term investing in it, you will catch a break as the stock will go higher regardless of whether you got panicked out on a pullback and decided to buy it back higher.

Unfortunately, plenty of stocks which have great potential can be not nearly as forgiving to their believers for years on end. Over the past several years, ATP Oil and Gas has treated its loyal holders like dogs. Personally, I have had mixed results trading in and out of it, but the common denominator has been that I always knew I was simply trading it with a clear exit plan. I never let the losing trade magically turn into an investment. Because it is a very high beta energy play filled with numerous shorts, ATPG lends itself to a vicious squeeze opportunity if you catch it at the right time. As with many stocks in the market in 2011, there have been headfakes galore, even when ATPG appeared to have been technically set up very well for a breakout. When that happens, your two best defenses are: 1) Position sizing, and 2) Protective stop-losses to stop the bleeding and move on to another trade.

In other words, ATPG is a very tough stock, and it really puts you to the test of whether you are a long-term investor with conviction, or whether you are just trading it. If you are the former, then you should periodically reassess your thesis to see if it has remained intact (and even then, you should still at least consider a maximum threshold for losses). If you fall into the latter category, then your exit strategy should be well-defined at all times, given how volatile and unforgiving the stock can be. If you are not sure whether you are investing or trading in it, you are better off staying away altogether, as this is clearly not Microsoft in the 1990’s.

Looking at the weekly chart of ATPG below, you can see that the 2010 lows were breached this fall, but price is still well above the 2008 lows of $2.75. The selling volume has picked up recently, and the stock remains in a downtrend since March of this year. Moreover, a retest of the 2008 lows cannot be ruled out if the October 2011 low of $5.71 is violated. Note the stock is not yet oversold according to the weekly Bollinger Bands. The best bet for the bulls is to hold this $6 area and work higher through the long-term sideways channel (blue lines).

ATP Oil is once again challenging the faith of its loyal investors. Make sure you know if you are, in fact, one of them. 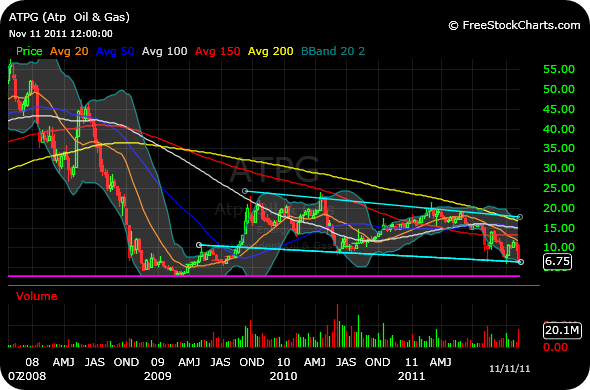