Working Through the Bear of All Bears 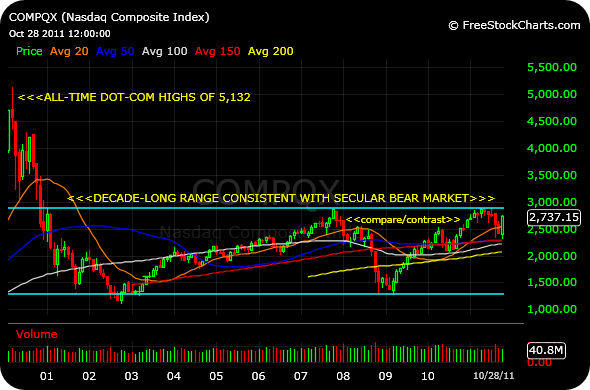 When the Nasdaq Composite along with quite a few other indices and sectors, such as the Russell 2000 small-cap Index and the oil services sector, ran directly into their respective 2007 highs last February, I penned several posts discussing the concept of long-term overhead supply. It was not particularly easy to resist the seemingly perpetual POMO-supported melt-up as I noted in this post as well as here, but running directly into multi-year reference points is nothing to cavalierly dismiss. Of course, the thesis was not that we would never reclaim those 2007 highs, but rather that when you run into them in a virtual straight-line, the presumption is that there will at least be a pregnant pause relative to the timeframe of the chart. Since we were looking at monthlies, the idea was that the market was simply luring in overeager bulls at that point before pulling out the rug for the next few months.

Several quarters later, we have indeed seen that long-term supply kick in to help put pressure on stocks being initially turned away from those 2007 highs. At issue now is whether we see continued weakness away from those highs like we did in 2008, despite the huge rally we have seen in October. Due to its marquee nature, I am going to focus on the Nasdaq here. For starters, you can see on the monthly chart above that the index has been working through a decade-long trading range after initially crashing in the blow-up of the dot-com bubble at the turn of the century. That type of action is entirely consistent with a major, secular bear market.

With roughly 1,200 serving as a floor on the downside, 3,000 has been firm resistance to the upside since 2001. In early-2008, the Nazzy rolled over from that latter level, broke below its 2007 lows before bear-flagging up to, and finding resistance at, its smoothing out 20 period monthly moving average and then rolling over again as the bear market got into its more aggressive stages.

This time around, we have seen five consecutive red monthly candles, followed by what will finish as a bullish engulfing candle when October concludes on Monday. After a prior steep move lower, the bullish engulfing candle should put you on watch for a fairly reliable upside reversal. As always, confirmation is necessary. However, the landscape appears to be different than what we saw in 2008, in the sense that we did not take out the lows of 2010–the prior year–while we know that in 2008 the lows of 2007 were breached in short order. Also note how quickly price has recaptured the 20 period monthly moving average this time around, compared to 2008. To support this idea, look not further than the charts of two old-time Nasdaq firms, Cisco and Intel. Both of them have not only been dead money since 2000, but they have more or less been downright awful performers. After the action over the past month or two, though, their monthly charts also point to the idea of the bulls regaining control of the long-term price action, with Intel breaking out from a ten-year resistance trendline and printing a wildly bullish marubozu monthly candle, while Cisco followed-through this month after the hammer candle it printed in August.

The secular bear market that began in 2000 could easily go on for several more years, and history indicates as much. Despite that, though, you can see how far removed the Nasdaq is from its all-time highs, meaning that even if the 3,000 level is breached to the upside over the next few months, it will not necessarily imply another 1982-2000 bull market scenario. For stock traders, the key remains respecting crucial reference points along the way. 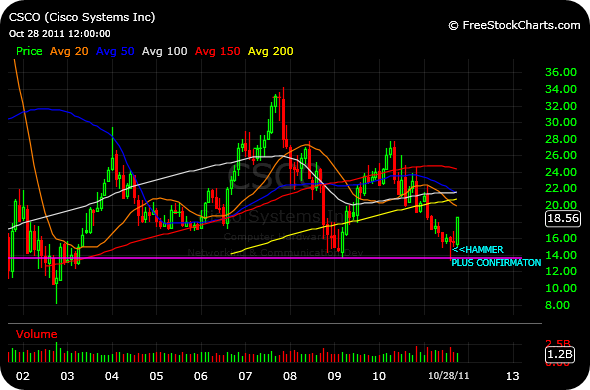 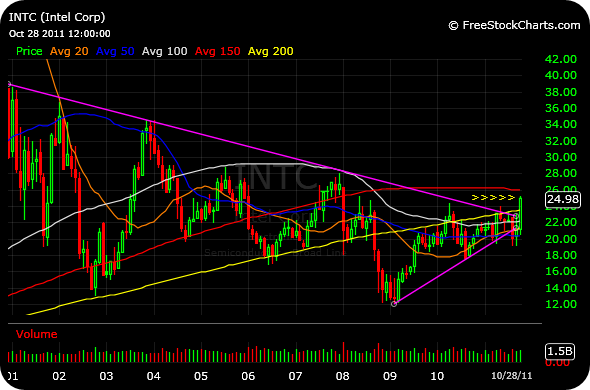