Hackers BACing Up the Wrong Tree?

I see there is a report out that “Anonymous,” a hacker group affiliated with WIkiLeaks, plans to release a slew of emails obtained from inside Bank of America. While I am happy to see that Julian Assange and his fellow wannabe cool kids have moved on from Dungeons & Dragons to the real world, I have to wonder how scandalous it is to presumably find out that a bunch of scumbags and shady cats work on Wall Street.

Rather than get caught up in “trading the news,” which I see is the chic thing to do these days, I will stay within the context of my philosophy and analyze the overall price action.

Looking at a daily chart of BAC, zoomed out, we have a serious attempt at a major bearish to bullish reversal (dating back to the correction that began in April, 2010). Over the past two months, after a sharp rally since December, the chart has settled into a textbook symmetrical triangle, with higher lows, but lower highs (pink lines). Note that this pattern can also be interpreted as a bull flag, or bullish continuation pattern of the rally from December. Note also the longer-term moving averages starting to smooth out, not to mention the 50 day turning up.

Either way, unless we see a high volume selling affair over the next few days that completely obliterates this setup, I would be looking for serious support buys in most of the major financials, including BAC. 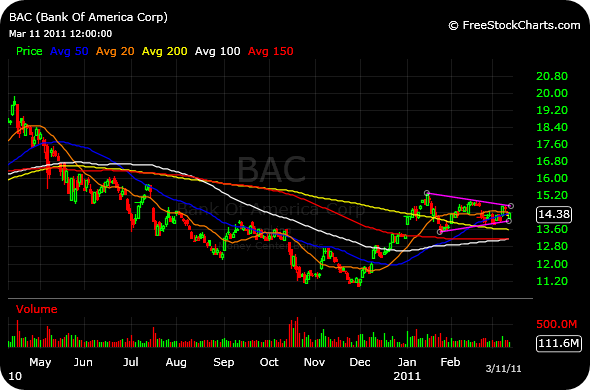