I AM at the Apex

Despite the impressive run in the precious metals during the past few quarters, the large cap gold miners have been notable laggards. As an example, IAMGOLD (IAG) has been the definition of “dead money” over the previous thirteen months, despite being nearly a tenbagger off of its November, 2008 bottom. On its face, this underperformance has caused even the most socially awkward and disturbing of gold bugs to stay away from the large cap gold plays and, instead, focus on the junior miners.

However, a closer look at the IAG weekly chart reveals a textbook symmetrical triangle, spanning over a year. The symmetrical triangle is generally considered to be a neutral pattern, despite having strong bullish undertones. With increasingly tighter price action, volatility tends to shrink as it nears the apex. We can see from the weekly chart below that the past year of broad compression is likely to end soon in the form of a violent explosion. Given the narrowing nature of a symmetrical triangle, the presumption is that this is a massive consolidation pattern, rather than a topping one.

Only time will tell, but I suspect that the large cap gold miners have successfully lulled the vast majority of traders to sleep, and are poised to wake up themselves in the not too distant future.

(Disclosure: I have no position in IAG) 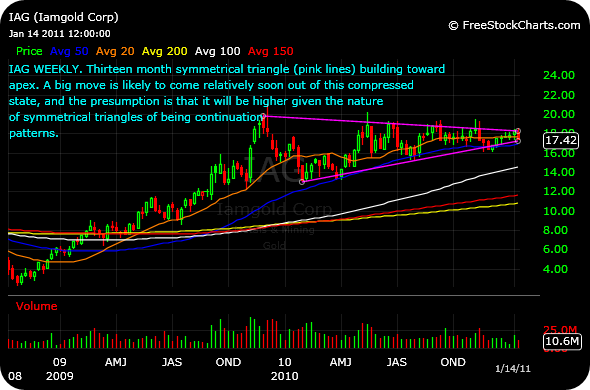