Protect Yourself at All Times 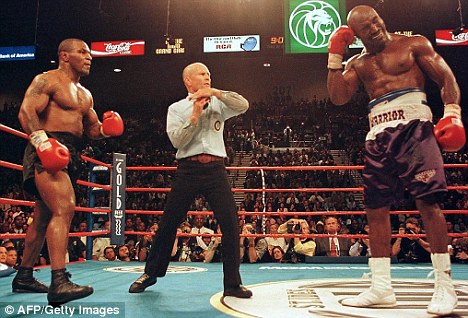 At a very early age, I quickly learned that my father had no intention of raising me with kid gloves. I remember being six years old and sitting in front of the television with him, watching the weekend boxing matches. I suppose, according to modern day psychology, I should have been traumatized for life, being exposed to that much real-time violence, blood and guts. Interestingly, I never had nightmares or anything of the like. In fact, I barely remember the actual fighting between the boxers. I do not remember much in the way of blood or anything gory either.

What I do vividly remember, however, is how my father would remind me before each and every fight of how to tell if the referee was any good. He told me that, just before the match commenced, if the referee advised the boxers to “protect yourself at all times,” then he was a good referee. If he did not, then he was a subpar official. Perhaps it may seem like a trivial way to judge a referee, but the point I took away from that is sometimes it is necessary to be reminded of the obvious. Although the boxers had a team of trainers, physicians and managers in their respective corners, they were ultimately all alone inside the ring, with nowhere to hide. If the opposing boxer decided to take a cheap shot at you even after the bell for the end of the round had rung, you still had to look out and protect yourself.

Similarly, in the stock market individual traders can often forget that, at the end of the day, they are singularly responsible for their profits and losses. Too often, the temptation for many retail traders is to latch on to a high profile trader and mimic their every move without much regard for risk tolerance and position sizing. This is an easy trap to fall into, as it serves as a way for retail traders to mentally absolve themselves of guilt, should they blow up their trading accounts. However, make no mistake that expecting some type of miracle bailout for your losses will not happen, at least not for us little people.

As this concept pertains to the current market, the overarching theme that I see over the past year has been the way in which Mr. Market has chopped up traders failing to adequately protect themselves. Those traders who enjoyed riding the trend down in 2008, and the subsequent trend back up for a few quarters in 2009, have since found a noticeable lack of a new trend ever since. To illustrate this point, let us take a look at some of the key areas that experienced huge run ups and subsequent crashes earlier this decade: the financials, emerging markets, and homebuilders. I think it is fair to say that all three of these areas were at the heart of the bubbles in credit, real estate and globalization/commodities. Naturally, they experienced a sharp rally off of the 2008 lows. However, they have since become “dead money.”

In each of the following weekly charts, notice how, for roughly the past year, traders who went long in anticipation of a breakout, or shorted a potential breakdown, have been repeatedly punished. Traders who properly hedged themselves likely made out well reasonably well, all things considered. Only the traders who combined experience, agility, clearheaded thinking, not to mention a healthy dose of luck were able to crush this market.

There is no way of knowing how long this period of overall dead money will last. Many market players believe that we will soon see a major breakdown. Other traders think that we are on the cusp of a significant breakout to new highs. Until the market definitively breaks one way or the other–and holds that break–remember now more than ever to protect yourself at all times. 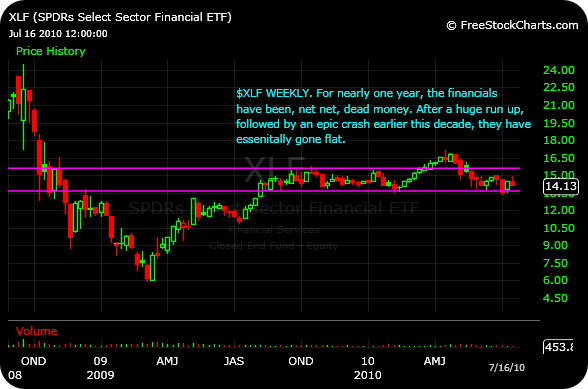 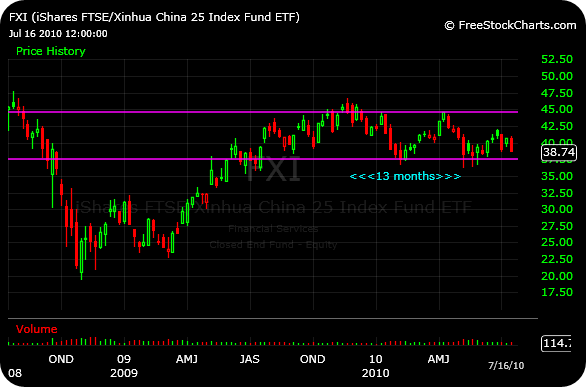 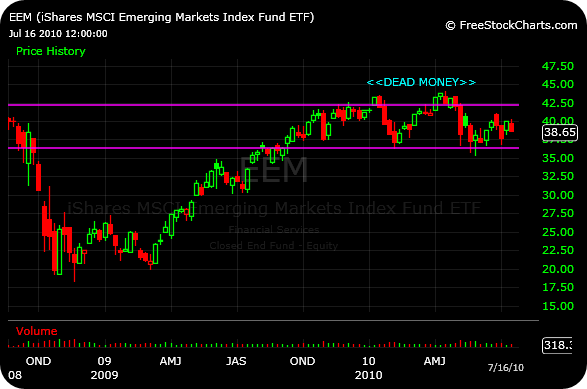 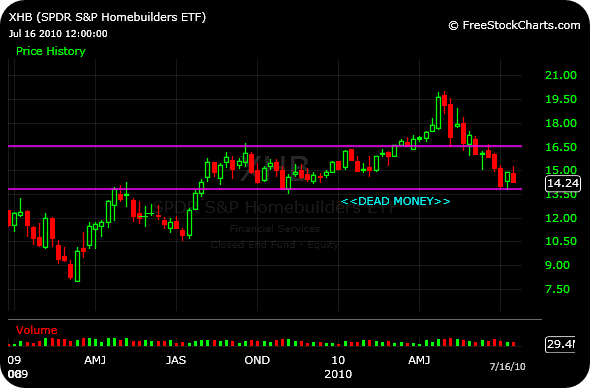