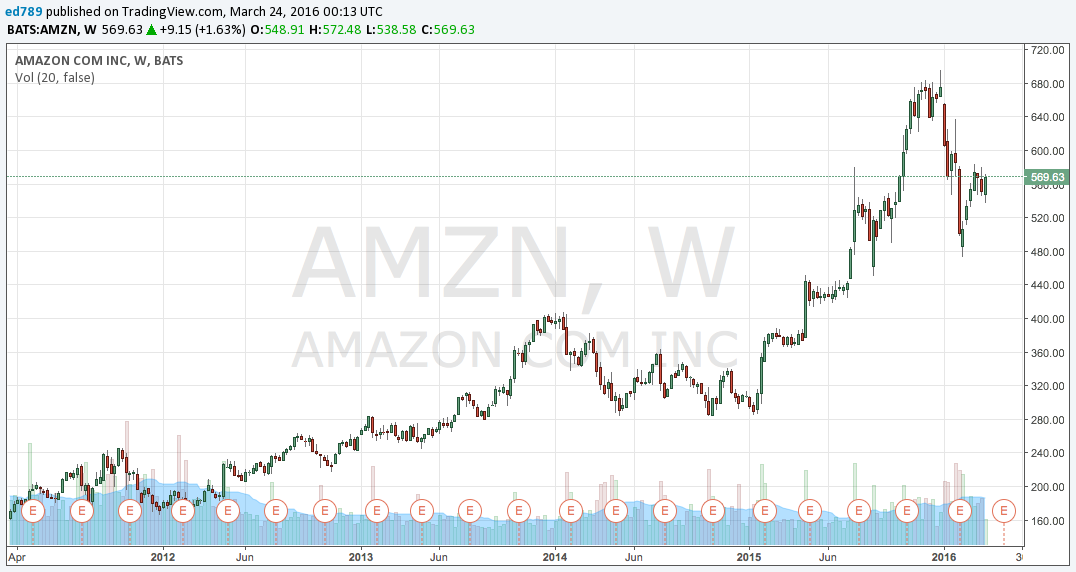 At the beginning of the Year (see here) I made a prediction that Amazon’s AWS rapid revenue growth was a result of the QE Unicorn VC Bubble and that the growth would decelerate very quickly as the bubble had popped and funding was drying up.  Three months later, and unfortunately for Amazon, not only have the Unicorn fundamentals continued to degrade but Google has stolen Apple, Dropbox and Spotify.  Additionally, Google has hired Diane Greene the former founder of VMWare to take their cloud business to the next level.  A few days ago she announced plans to build 12 new data centers and will be ramping up the marketing efforts big time which have been lacking.  I would expect price wars to ensue due to the commodity nature of the business.  Also AMZN did not lower prices once in 2015 which was an aberration compared to the previous years which had seen draconian price cuts.  Given all of the above the sell-side is woefully optimistic on the revenue projections at AWS and will later this year race to the bottom in lowering estimates.  Additionally the multiple should contract in anticipation of the new capacity that google is adding much like hotel stocks have multiple compression when new supply is announced.  Keep in mind the entire 100% move in the stock last year was due to multiple expansion from the AWS business being revealed to the investor community and it was likely at peak metrics.

The chart looks like its forming a weekly head and shoulders and since the beginning of March is making lower highs.  My guess is we should retest the $480 level and eventually breakthrough.  The above news makes me more inclined to think we roll over in this stock soon.  The stock is woefully over owned by Momentum chasing hedge funds that will be in redemption mode.  My advice to them is sell first and often.  This stock has had a tremendous run but it is over.  I see years of underperformance in the name as they continue to disappoint on AWS, general corporate profitability and slowing overall revenue growth.

If you enjoy the content at iBankCoin, please follow us on Twitter
2016-03-23
BlueStar
Share
Previous The Fed Just Blinked And History Suggests That It Is Not Good
Next Is This A Bear Market Rally?