Oil, The Dollar and Equities: A Curious Correlation!

Tonight it looks like the oil market wants to retest the $64.38 level which is the 61.8% Fibonacci support from the 2008 low.  We tested it last Monday and it bounced but it has lately slid lower over the last week.  If we should take out that level with conviction then we are going to the low $50’s to test the next Fibonacci support.

I was thinking about writing a piece on Oil and its detrimental effects on the debt markets and the economy and how equities will implode.  There are plenty of other people who have written on the subject over the last several weeks and they make a compelling fundamental case that is bearish for equities.  Rather I decided to investigate the long term relationship between oil, the dollar and equities and boil this all down to simple math.  Math is elegant and less subject to the vagaries of fundamental debate.

I consulted my buddy Tim Wood who was also pondering this question as well.  We looked at the Dollar:Oil Ratio and noticed some curious chart patterns.  This ratio peaked out at around 9 in 1998 and has been decimated by the Feds efforts to reflate since the tech bubble implosion in 2000.  The ratio bottomed in 2008 at around 0.50.  In the financial crisis the ratio spiked back up to 2.6 as the dollar rallied and oil imploded.  Since 2011 the ratio has stabilized at around 0.75 and has based.  Since the middle of the year the ratio has slowly gathered speed and lately exploded up to 1.37, a level not seen since 2009.  What does this have to do with equities?  Since 1985 the Dollar:Oil ratio has had a negative correlation of -0.71 with equities meaning that a rising ratio suggests weaker equity prices over time.  In the financial crisis years 2007 and 2008 the correlation was -0.84.  Sometimes the correlation in any given year is low from closer to zero correlation to -0.50.  In general this is not a good timing tool for equity tops or bottoms.  However, from eyeballing the data the correlation tends to be stronger when there is a second derivate change like we are experiencing now.  Violent moves tend to suggest more inversely correlated moves in equities.  The graph below is courtesy of Tim and shows the ratio in blue and the DJIA in black. 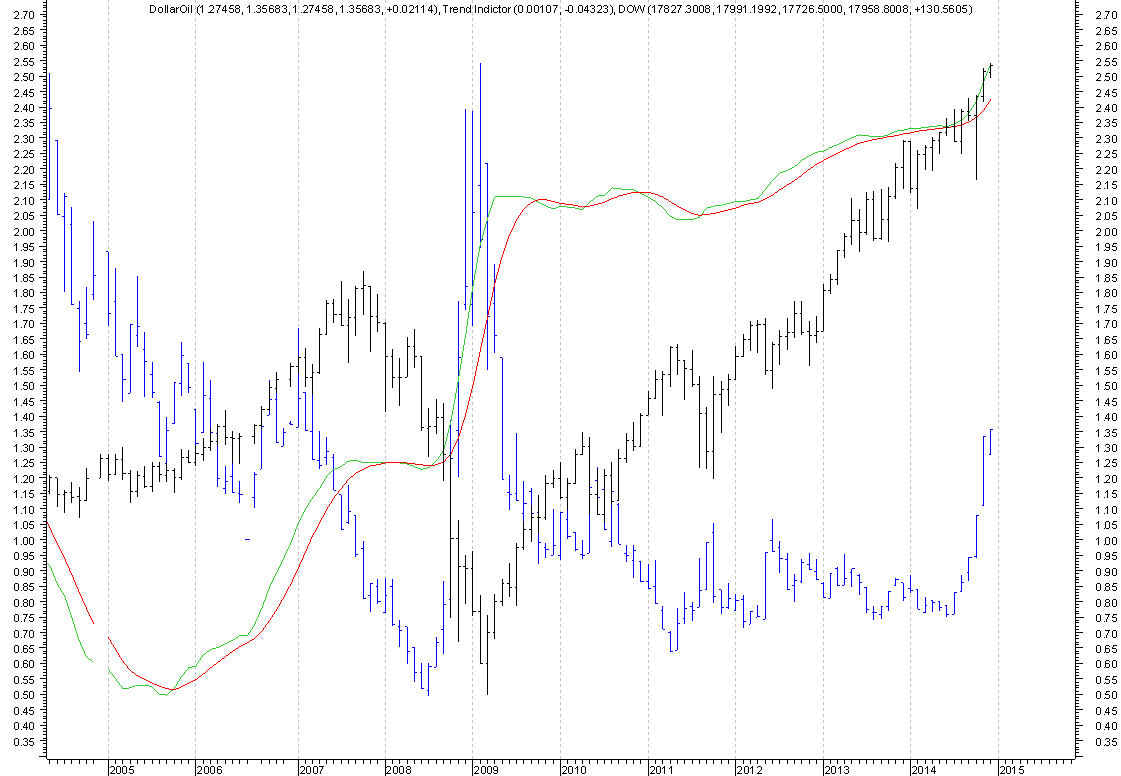 What is rather interesting is that YTD the correlation between the Dollar:Oil ratio and equities is a positive 0.60.  Yes that is correct it is positive!  So that begs the questions is it different this time?  Sure anything is possible or is it more likely the the relationship has been temporarily warped by three of the worlds largest central banks promising or pumping new candy into the system after the Fed ended QE.  If you believe that the correlation will mean revert to its long term -0.70 then 1 of 3 things needs to happen.  Oil needs to rally back to $110, the Dollar needs to fall substantially or equities need to correct a lot.  I don’t see the first two happening given the damage in the Oil chart and the strength in the Dollar chart.  The equity chart looks strong now but the internals are awful and there are numerous divergences that I have talked about before that, if not for the CB intervention, we would have seen stocks a lot lower by now.  The question as always is: can the CB’s deny mother nature?  My bet is they must pay the piper at some point and this analysis suggest we are closer than you may think.