Eat Some Turkey, Then Buy Some Stocks

What a difference four days can make. Last week I was bearish, buying the inverse ultras, because the end of the world was upon us. This week started out cautiously in cash. Today, I started adding stocks again.

Here’s the most likely scenario that is developing:

A late Q4 rally that will take us into the New Year, potentially as high as S&P 1,133—the same level at the early October breakdown.

Last Friday’s reversal has ended up being more than just a one-day wonder. For one thing, we saw the highest volume since the October 10 low.

We also may have seen the top of the T-Bond bubble, which was Thursday’s panic high of 129 19/32 on the futures.

The close today back above last Wednesday’s S&P 864 was another positive confirmation that we could be headed higher again. A continuing expansion of upside breath and volume next week should confirm whether or not the uptrend is in place.

Finally, the NYSE Bullish Percent jumped from 14% yesterday, to 23% today. The strong reversal this week off the bottom of 4% last week, along with the fact that we’ve now seen a higher bottom is a major positive. 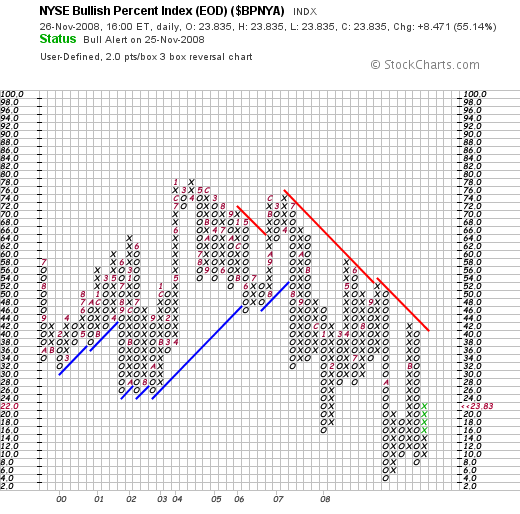 The $BPNYA is now in position to assault the 30% level, possibly Friday, but more likely on Monday or Tuesday. A break above that level would also be confirmation of an uptrend and would add creedence for a rally into the New Year.

The risk remains a break of last Friday’s lows, then support at S&P 733, then next at 605. I don’t believe we’ll see that unless we get a large negative news event.

The sectors to focus on as a rally proceeds, are the oversold materials, energy, and global growth and infrastructure themes.

Understand that this is may be the last chance this year for hedgies and fundies to make up for a year of terrible performance. They’re going to be jumping on this train, if we see more confirmation of a sustained rally early next week.

Regardless, of the outcome, we are in a bear market, so any rallies, when they develop, will probably be fairly short, perhaps 1 -2 months in length at most.

My long term view is still bearish with a bottom of this bear market cycle probably coming early to mid 2010. That means a best case scenario is that we don’t go below 733 S&P, and just trade in a broad range and retest that low down the road.

END_OF_DOCUMENT_TOKEN_TO_BE_REPLACED

Back in the Game

I couldn’t have scripted today any better. After a quick pullback early, the market steadily rose, closing strong the last hour. True to my word, I did go long a bunch of stocks. Actually, I jumped the gun a little and bought a few names prior to the last hour.

Although the “all-clear” has not yet sounded, the market is looking a little better. The often looked for year-end rally may now be upon us, for however long that might be.

Let us all give thanks.

Everyone have a Happy Thanksgiving and God bless.

END_OF_DOCUMENT_TOKEN_TO_BE_REPLACED

Let Us Give Thanks

The market has been up the day before and the day after Thanksgiving in 31 of the past 34 years. However, it wasn’t up in 2006 and 2007, so we shall see if this year is different.

As I commented on Woody’s post from yesterday, I was looking for a pullback this morning and then a steady climb higher today. So far, so good. Should the market look strong going into the last hour, I will be adding stocks to my portfolio.

I’ve been nibbling on C this morning, and bought 11,000 shares at an average of $6.789. It’s worthy to note that Mexican gangsta, Carlos Slim, bought some shares, El Mariachi-style.

One other note: GLD closed right at it’s 50 DMA last Friday, and has been trading above it’s 50 DMA the past two days. Should it stay above that today, I will be adding it to my account. On a relative strength basis, GLD is starting to outperform IEI. Keep an eye on the Treasuries. They are the only asset class up 10% + YTD, but that might be changing in the near future.

END_OF_DOCUMENT_TOKEN_TO_BE_REPLACED

This makes no sense, unless you believe in the tooth fairy and the U.S. governments ability to bailout everybody who gets their teeth knocked out.

HTS, being a mortgage REIT is at the center of all of what’s wrong with this country. It invests in single family ARMs and numerous toxic assets. Hence, it’s “Costanza qualified”.

Also bought a large block of Aqua America, Inc. [[WTR]] , @ $21. This is the largest publicly traded water utility in the U.S. with profit margins that are double that of its competitors. Geographically diverse and pays a decent dividend. Stop loss at $17.90.

END_OF_DOCUMENT_TOKEN_TO_BE_REPLACED

Stupid and contagious entertainment. Sorry, but I just don’t trust the past two days rally. This is a bear market rally that appears that it may fizzle out, just in time for Thanksgiving.

That said, the NYSE Bullish Percent Index ($NYBPA) gained about 4% yesterday to 12%, up from 8%. It is still in very oversold territory. However, that’s not necessarily cause for “Costanza buying elation”. This market has to show more strength, especially from the leaders before I would start bankrolling certain blue chippers.

If you’re following the $NYBPA, a meaningful reversal would occur at the 14% level. But, if your’re more of an intermediate term position trader or longer term investor, I wouldn’t get excited until we approach the 30% level and breakthrough it.

Cash is still king, even though it appears to be a pussified furry boot loving queen.

END_OF_DOCUMENT_TOKEN_TO_BE_REPLACED

In a brief moment of clarity, Mike Tyson once said, “Every man has a plan—until he gets hit.” When events are beyond our control, we can’t tell what’s coming next. Well-laid plans usually get abandoned in moments of crisis. Remember “The Paulson Plan”? Exactly.

Given the complexity of the financial system, and the current situation which is getting worse, not better, another disaster is inevitable. Forget about the Citi bailout. Yeah, fuggetaboutit. If it actually happens, it won’t matter. It’s irrelevant. The writing is already on the wall. The world’s problems go far beyond one bank dubbed “too big to fail”. Just know that it’s already a failure. Most banks are.

The current global financial crisis has resulted from what sociologist Charles Perrow might call, “system accidents”. In his book, Normal Accidents, Perrow points out that once a system—like the financial markets– reaches a critical mass of complexity (viz. CMOs, ABS, CDOs, CDS, etc.) there is no one clear cause for the “accident”. Accidents become an inherent characteristic of the system. They become inevitable. One negative event leads to another, in a sort of feeding frenzy.

Remember the sub-prime crisis? That crisis or “accident” has now spread so quickly, and morphed into a global crisis, with far more consequences and irreparable damage than people expected.

From a moral and ethical perspective, the problem is much deeper and goes right to the heart of man: arrogance, self-centeredness, complacency, avoidance of suffering and obsession with wealth. “The love of money is the root of all evil”. This speaks to the spiritual condition of all of us and is at the epicenter of these trials and tribulations.

I believe that we are now on the verge of a global depression. I don’t know what can prevent it from happening. It is inevitable, given the multiplicity of the problems.

I know, many people don’t like to use the “D” word. The glass is simply half full, right? Wrong. I believe that this thing will turn out far worse than many can even imagine. This is just the beginning.

There is no solution on this earth at the present, to stop a full scale meltdown and a total renovation of “the system”. (And, we haven’t even talked about a terrorist event, like a “dirty bomb”, or a potentially massive earthquake in Japan). The end of all this will not be pretty.

While we can’t tell exactly what’s coming next, or what it will look like, we can take the steps and make the necessary preparations before that point comes. That will determine whether or not we survive the next “big one”.

That said, I’m going to be hiding out in cash, soon. Very soon. Sell into the rallies.

Given the severity of how all this might turn out, from a financial perspective, the way to survive is by playing both sides of the market, by hit and run trading with a percentage of your cash.

From a more important perspective, it’s come to Jesus time. Time to get right with God.