Good on you all. I won’t recap 2008. What’s the point? The year has been sliced, diced and analyzed ad nauseum. If the asshats in the media use the word “unprecedented” one more time, I’m going to cancel my free subscription.

The market looks like it’s setting up for a potentially nice rally that could take us back close to 10k DJIA. However, I’m waiting for better confirmation of that possibly today and into next week before loading up (albeit nervously).

That said, there is a cornucopia of things that can sink the market again this year. While some people have been talking of a recovery in 2009, I staunchly believe that is premature. Sorry, no “V-bottom” is in the cards. Just more pain….and suffering. However, that doesn’t mean that the market won’t rally. Hey, traders have to make a living. Someone has to push the market back and forth.

As I alluded to, lots of things can go wrong—and probably will. Joe Biden even said so.

Here’s one: the Israel / Gaza thing is escalating and could incite Iran and other Israeli-haters into action. Just know that Israel is very close to attacking Iranian nukular [sic] facilities, possibly within the next 30 days. With Iran getting close to nuclear warhead capabilities, not only is there a threat to Israel, there is a very real threat to the U.S. which has been discussed and analyzed now for several years. I’m talking about an “E-bomb”. Were one to be deployed successfully against us, or any other country for that matter,  by Iranian-backed terrorists, the economic meltdown would make 2008 look like the good ol’ days, not to mention the death, disruption and social chaos.

END_OF_DOCUMENT_TOKEN_TO_BE_REPLACED

Much to my surprise, this market is getting ready to lift off, thanks in part to the huge interest rate cut by the Fed (which just about everyone pooh-poohed). See, contrary to what bearshitters have postulated, interest rate cuts are good for the market. It just takes a little time and patience for things to kick in.

The size of the rate cut was actually historic, despite being downplayed by the bears.

Two weeks ago, I mentioned that I thought the market was setting up for a “shakeout”. Well, guess what? It sort of happened. Problem was, the market held the double bottom the past week, then broke out today. So no shakeout pattern, which is even better news for the bulls. The weak bulls weren’t shaken out. That tells me the bulls are more emboldened than I originally thought.

I’m really starting to see that we’re going higher, but want to see that delightful vision confirmed by market action and volume tomorrow and through Monday. Size matters.

If I do get confirmation, I may load the boat on the long side, including a large dosage of everybody’s favorite rally monkey-esque double ultra ETFs.

On top of that financial trickery, stocks are simply oversold. Sorry. We’re just due for a mark up here.

Cover those shorts. The future ain’t what it used to be.

When it comes to interest rate manipulations, in the end, size does matter.

END_OF_DOCUMENT_TOKEN_TO_BE_REPLACED

Despite the stupidness of the market, the bulls got the breakout from this recent trading range that they were looking for. 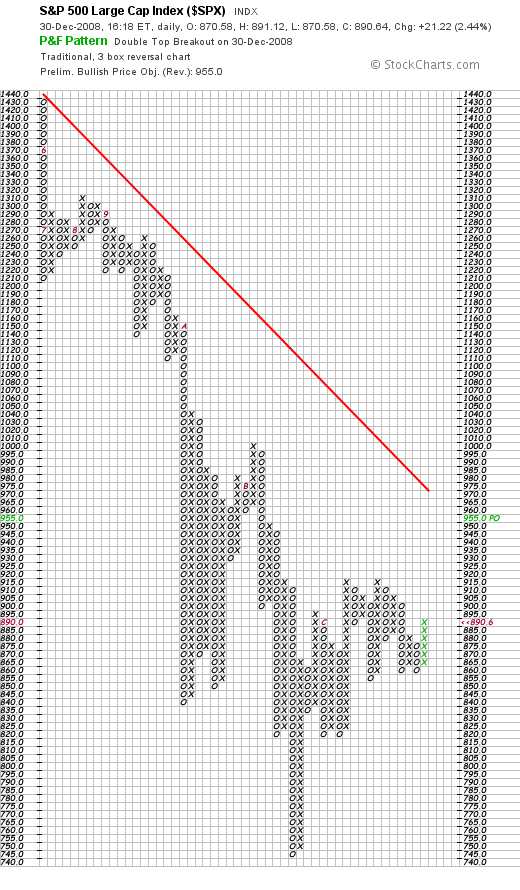 Once the S&P works it’s way above 915, it’s clear sailing up to 955 – 970, as evidenced by the small amount of resistance on this PnF chart. I’d look for bigger volume to confirm this recent joyride, though.

My gut feeling is that the bears are about to get a taste of what they’ve dished out to the bulls all year long—a shit samwich, with extra mayo. Tisk, tisk.

As for me, I will continue blowing up small Japanese cars with my new shotgun, a Christmas present, no less.

END_OF_DOCUMENT_TOKEN_TO_BE_REPLACED

Deflation will be the big story of 2009.

The U.S. Dollar will be the biggest beneficiary of the global deflationary spiral.

More high-profile corporate scandals will come to light, as the disintegration of corporate management teams, misappropriation of funds, and mistrust by the public continues.

END_OF_DOCUMENT_TOKEN_TO_BE_REPLACED

I think this is a stock worth throwing some money at. So I bought a Lamborghini’s worth. Riding around town in such an egregious in-your-face vehicle will have to wait until HHFO*. Better to own this stock. 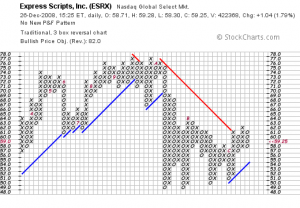 ESRX is ripe for a breakout, and it go higher in this environment, as fund managers look to reposition more of their dwindling money into the defensive healthcare sector.

END_OF_DOCUMENT_TOKEN_TO_BE_REPLACED

I will be in a celebratory and festive mode from now until the New Year, so I want to wish all of you peace and good cheer during this time of the year.

Expect the unexpected in 2009. Except for Mary and Joseph, some shepherds and a few prophets, nobody expected God to show up on the scene, some 2,000 years ago, robed in the flesh of a baby. Who’d have thought?

Point is, there’s lots of stuff we don’t know about, don’t think of, or even conceive of, that can happen to totally change our world (hopefully for good).

God bless, and may peace and love rule and reign in your hearts this season.