Have we seen the bottom on this Market? The case is starting to build, line upon line, brick by brick, here a little, there a little, that we are seeing the Market putting in a bottom. For conservative investors, this is not to say that the coast is clear. However, traders should be playing this bounce as it is developing.

I’ve said in the past that for us to begin to recover from this bear market, we need to see asset prices stabilize, particularly in the housing sector. Now we’re hearing this morning about Treasury proposing plans to lower interest rates to 4.50% on home mortgages. The details aren’t clear yet, but were they to include both new home buyers and refinancings in a plan of that magnitude, that could be a huge shot in the arm to the economy.

It’s also interesting that the homies have begun to rally off a bottom. Check out XHB, PHM, and DHI. Even lowly SPF is showing signs of life. Fundamentally, this doesn’t make sense. But what is, is. 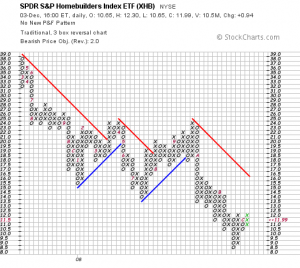 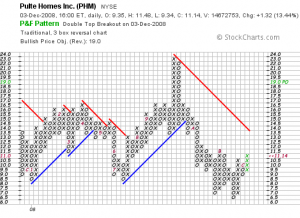 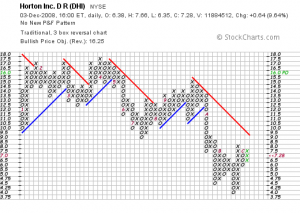 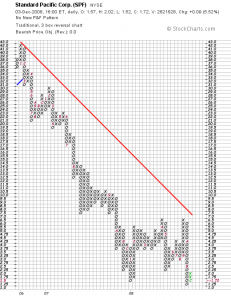 Consider this as well: the Market’s response to bad news has been encouraging. Last week, the Market rallied despite news that consumer spending numbers dropped a full percentage point, the worst reading since the 9/11 attack….consumer confidence fell to a 28 year low….durable goods orders fell sharply, and GDP was lowered to -0.5% for Q3. All this helps to build the case that a bottom is being put in.

Other things to consider:

1. We are starting to see leadership in large caps, particularly the financials. I know that this flys in the face of conventional wisdom that the small caps, because of their sensitivity and flexibility, turn first. But, the last bull market recovery that started in late 2002-early 2003 was lead by financials and large caps.

2. Volatility has been off the charts, lately. If you go back and study previous bear markets, this is ALWAYS the case in the latter stages of the bear.

3. Commodity prices have plunged, particularly energy. This helps both the consumer and non-commodity related enterprises.

4. Current U.S. and global policies are focused on asset price support and the eventual recapitalization of the banks

6. Also, check out the performance of some economically sensitive names like FDX and HD. They’re both now trading above their 50 DMAs.

7. Sentiment is very negative, which sets up the “Costanza Effect”.

These are just a few of the building blocks of a bottom. More are developing.

One thing that would concern me is the lack of growth names among the leaders. We need to see leadership from names like GOOG, AAPL, RIMM and the like, for us to see a market recovery that is sustainable, imo.

And of course, keep a vigilant eye on the leading economic indicators for confirmation as we go into the new year.

Happy trading and be well.