I am, because of personal preferences, going to cash in at this time. Since I’m up 49% ytd, I have the luxury of “calling it good” and kicking back to enjoy the fruits of my “labor”. Between, an Alaskan cruise, flyfishing, family reunions, trips to the French countryside and the Italian riviera….who has time to follow the market?

Ergo, I will be taking the summer off from trading. In essence, I will be “playing” all summer, just not in the market. Maybe I will learn to play a musical instrument (or not). See, I just think the market goes nowhere this summer, or perhaps, worse….

My concerns are centered around the extent of the recent run up in the stock market, the action in the bond market and interest rates, and the amount of government intervention and regulation in the capital markets.

Given that the recent market rally is over two standard deviations from the annualized mean over the past 100 years, this condition will not last. It is simply a matter of time. Even now, the rally is fizzling out. Consider that many traders and investors have made egregious returns the past three months, and many will be parking their funds and taking vacations.

Economic news on Wednesday was uneventful and the Treasury market remained depressed from the open. The 10 year note auction was pitifully weak, and by midday, Treasuries were lower, with the 30 yr crashing 2 3/4 of a point, reaching a 4.833% yield before rebounding late in the day. The 10 yr yield spiked at just under 4% during the sell-off after the auction results. All this should be concerning to us all, even as the Russians announced yesterday that they will be reducing a portion of their U.S. Treasury holdings in the future. This news contributed to driving the dollar lower. Russia holds about $120 billion in Treasuries in reserves. The dollar is heading down long term.

The Chinese are of the same mindset. Maybe they won’t be selling Treasuries, but they won’t be buying in size either. (Sorry, Mr. Obama). Still, they don’t have a choice. They have to buy some Treasuries given their egregiously large trade surplus with the U.S.. So they will still be buyers, but just on a residual basis. So, where will the government get the money to fund the deficits?

Don’t be surprised if Obama uses his rhetorical skills to scam the U.S. consumer, since the consumer is in “savings mode” right now. You will be called “unpatriotic” if you don’t invest in U.S. Treasuries. Mark my word on this.

It is only common sense to believe that more government regulation and taxation means less free enterprise and available capital. Capital will leave the U.S. and seek investment elsewhere. It is coming. Add a protectionist mindset, not only in the U.S., but globally, and you have a recipe for another meltdown in the markets. The bureaucrats just don’t get it.

As for me, I will be in cash, at least for the summer, losing out on the chance to make gains, but gaining peace of mind and the enjoyment of family and friends.

However, if you will permit me to throw in my two cents: look to the commodity markets. My top picks for you non-futures traders are: DBC, FXA, FXC, and USO. Stay away from UNG, as it will go lower because of supply. I’m not bullish on gold or bearish on it either, just neutral.

On a global / macro scale, stay away from the Euro. Hold fast to the English-speaking commodity producing countries, and short the commodity consuming countries.

In closing, I bid you farewell. I have asked The Fly to take me off the active duty roster, since I will be playing “rich man”, cruising the seas and visiting my vineyards.

I’ve been following and blogging on IBC / Fly on Wall Street for over two years now. It has been a fun experience.  I’ve definitely enjoyed all of you, including the personalities and alter-egos (thanks, Jake), and the banter, but more importantly the many perspectives and views on the market.

Thanks to all of you bloggers and readers, but especially a big thanks to The Fly / Sr. Tropicana / Horatio Clawhammer / Plutonium  Petey, the Space Alien Magician.

END_OF_DOCUMENT_TOKEN_TO_BE_REPLACED

Sometimes a chart can be a thing of beauty. Take for instance this point and figure chart of the Russell 2000. 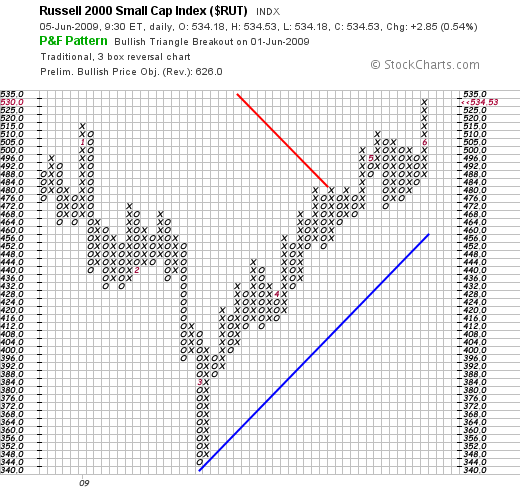 Yes, a bullish triangle breakout is a thing to behold. How feel you about this?

The Russell, being a small company index, is trading like we will be coming out of this recession within six months. Therefore, it behooves us all to continue to focus on early to mid-cycle stocks in financials, consumer discretionary and also tech and industrials, especially in the smaller to mid-size capitalizations.

If investors continue to focus in these areas, we should expect to see a sell off in energy and materials-based stocks, as money rotates to the early cycle growth names. That, in and of itself, might confirm the thesis that we are, in fact, going to see a recovery in our economy begin by year end.

Other signs to look for along the way are the continued narrowing of spreads between high yield bonds and Treasuries, the strength of the EUR/Yen cross, a significant drop in unemployment insurance claims and any pick up in M&A activity.

END_OF_DOCUMENT_TOKEN_TO_BE_REPLACED

Look, I realize that some of you out there are praying and hoping for the banks to fail, just so you can bank coin on your short positions, including FAZ and SKF. All I can say is that men with straight-jackets will be showing up at your door shortly. Anyone wanting our financial system to fail, and bank stocks to get pummeled, needs to have their head examined, and their Taliban-laden camel parade cancelled.

I think people can start to look at buying banks (selectively) here. Just be aware that there is always a possibility of a correction and that things may move lower, but we can view that as a buying opportunity. The main thing is to begin to establish a position now with some of your money. You will not be sorry in the end.

I say that because it’s highly probable that the worst of the global financial crisis has passed. I say the worst, because there is probably still more to come, most likely in the form of CRE and corporate defaults. But since the fall of 2008, central banks around the globe have stepped in to stabilize markets. Yeah, I know there’s a cost, but we’ll deal with that later. In the meantime, it’s about the survival of the system, and I think we can start to see that it will survive, in some form or fashion.

And yes, I know that the banks, as a group, have rallied over 100% from the March lows, but they are still down over 70% from their peak in 2006. There is still room for upside, and it could be quite enormous.

The “Ring of Fire” that the government and the Fed have created around the 19 largest banks tells me that the question of bank insolvency has already been answered. Those 19 represent over 70% of U.S. bank assets, and are the primary elements for systemic risk. They will not be allowed to fail, politically, or economically.

Having been stress tested, these banks have been able to successfully raise the capital required and will most likely trade much differently from the rest of the banking industry. Barring a complete global meltdown, due to Comet 2012, these banks will survive and thrive, having already raised the mandatory capital required by Geithner and Bernanke.

As a result, I believe that many of the credit issues raised 6 months ago will NOT be a big determining factor when analysts look at valuations on these banks.

It’s simple. You take the estimated pool of credit losses generated from the “stress tests”, and use that estimated pool as the starting point. After each quarter’s reported credit losses, you deduct the actual losses from the pool going forward the next 8 quarters. If the bank stays in-line, or exceeds expectations, their stock will not only hold steady, but most likely increase in value. Also, as long as a banks pretax/pre-provision revenue stays in line with expected losses, those banks should trade better than the non-19 who were not stress tested, no?

In summary, the 19 banks should trade at higher valuations than the rest of the banks, unless those other banks volunteer and submit to stress tests as well.

Having raised sufficient capital to meet the stress tests, those banks will trade at normalized earnings out one to two years, versus the non-stress tested banks which will trade based on capital concerns and credit quality issues.

That said, expect more bad news and more bank failures, but realize that banking, like blogging, is a multi-tiered system now.

END_OF_DOCUMENT_TOKEN_TO_BE_REPLACED

Good morning! Check out the BKX. Banks are moving this morning based on perception that margin expansion will be increasing, even as their costs for credit stay low. Their spreads are widening due to the lack of competition from the securitization market, which is now dead. Many banks are now able to charge a premium for loans. Factor in a steepening yield curve, and some of these well run banks will see huge expansion in their margins.

Specifically, I like names like [[USB]], [[KEY]] and [[SIVB]], which have low exposure to construction and commercial real estate. Stay away from names like [[BBT]] and [[SNV]].

Where I will be dead wrong on this is if the employment market continues to deteriorate and we see this recession go into the second half of 2010.

We will probably see a pullback here at some point. Banks should be bought on weakness.

If you want to buy the banks, be selective. I wouldn’t necessarily buy an ETF or and index.

I’ll post more here and in The PPT, as I have time.

END_OF_DOCUMENT_TOKEN_TO_BE_REPLACED

This is ridiculous, but who am I to argue with all the major U.S. stock indices up over 2% this morning? It’s party time! The bears are getting rolled!

With the Russell 2000 up over 3.5% today, that’s the place to keep playing. Or, you can buy high yield bonds via HYG or JNK and get paid handsomely.

With that, I bought:

One interesting point of reference is the NYSE. If you look at the $NYA, it broke out of a bullish triangle on Friday and just broke 6,100 today. 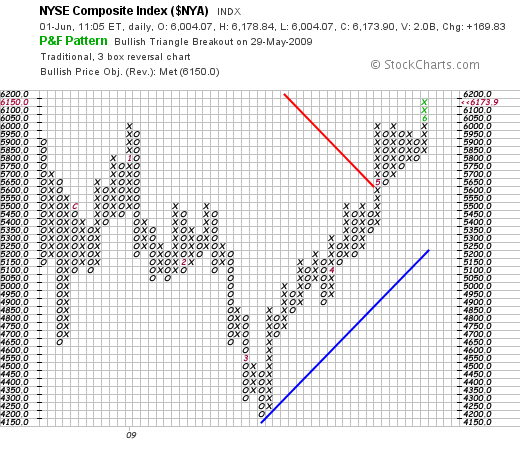 This is significant for a number of obvious reasons, but especially because the NYSE is where we see large program trading. My hunch is that we could start to see volume pick up here.

SPX also over 940 today. This is also significant.